Department of Anaesthesiology and CIESAL publish study on effectiveness of methadone

Researchers from CIESAL and the School of Medicine’s Department of Anaesthesiology published a study on the effectiveness of methadone in the management postoperative of postsurgical pain after in laparoscopic cholecystectomy. 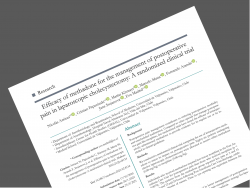 A randomised clinical trial was conducted in 86 patients who underwent cholecystectomy under remifentanil anaesthesia and were randomised into two groups who received to either receive methadone or morphine for pain management.

The results of this trial suggest clear advantages to the intraoperative use of methadone over morphine, as it is an attractive option for the relief postoperative pain, and  it has a dual effect on opioid receptors and a non-competitive antagonism with NMDA receptors.

This strategy reduces the need for rescue morphine medication (morphine administered according to the patient’s pain during the postsurgical period) and is associated with fewer adverse events than morphine.

This trial reports the use of methadone as an effective and safe drug for major surgery in adults. The clinical trial, which was conducted following the CONSORT protocol and Cochrane methodology in its entirety, qualifies as a trial with a very low risk of bias and no conflict of interest with the pharmaceutical industry. We hope this study is included can be of help in future systematic reviews contributing to clinical decision-making and public policy.

CIESAL article on the use of Ivermectin in COVID patients was the highest impact article of 2021 in important British journal.