CIESAL researchers presented at the annual meeting of Cochrane Iberoamericana 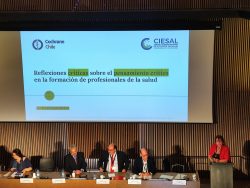 The event, which coincided with the 25th anniversary of the creation of the Cochrane Center, brought together more than 200 people who participated in an extensive program of scientific, training and discussion activities on evidence-based healthcare and the promotion and application of critical thinking in medicine.

Eva Madrid, director of CIESAL, gave a presentation on “Critical reflections on critical thinking” during the round table on the training of professionals in medicine. In her presentation, Madrid referred to the need to exercise critical thinking in order not to fall into fallacies where the premises seem to support an argument that is only apparently valid; the need to teach critical analysis to the clinician and how to incorporate critical thinking in professionals who do not bring these competencies from the undergraduate level. In this sense, Dr. Madrid, among her conclusions, raised the need to develop a critical mass of alumni as promoters and teachers of evidence-based medicine, in the same way as has happened with other generational challenges in medicine, such as the teaching of molecular biology and informatics competencies applied to medicine.

Javier Bracchiglione, CIESAL researcher and PhD student at the Autonomous University of Barcelona, participated as coordinator in one of the working groups, where he explained a system developed in his doctoral thesis, called GROOVE (Graphical Representation of Overlop for OVErviews), which contributes to improving the overviews used in systematic reviews. He was also co-moderator of the round table on “Methodological advances in electronic searches of scientific literature”.

See the complete program of the Cochrane Meeting in:

Álvaro Ardiles assumes as research coordinator of the School of Medicine

CIESAL researchers presented at the annual meeting of Cochrane Iberoamericana